Danny Phantom 2: Back to the Drawing Board

“…In another dimension, an artist brainstorms to create a new look for a forgotten cartoon character… 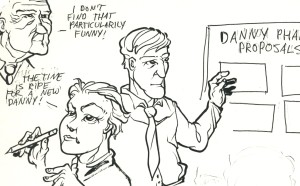 “… the idea is rejected by the artist’s editor, and thrown in the waste basket.”

unpublished artwork for a Danny Phantom newspaper strip (c1994). Danny’s introduction in Jerry’s 1986 radio play,  The Search for Danny Phantom, inspired his brother Wayne to visualize ideas like having a cemetery as Danny’s home, with new supporting characters such as a trio of bats, a couple grave-diggers, and a zombie. (illus.)